Published: May 11, 2022 by Stephanie Gravalese · This post may contain affiliate links · 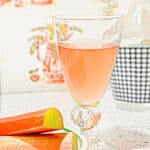 This rhubarb syrup takes your desserts and drinks to the next level! One of my favorite summer flavors, this no-heat method is a game-changer!

This recipe makes a sweet syrup that can be used to top ice cream, waffles, or pancakes! Best of all, it uses NO HEAT! No turning on your oven when it's roasting hot outside. If you're wondering what rhubarb tastes like and how to use it, read on!

Rhubarb is a plant that belongs to the buckwheat family. You might be surprised to learn that this plant is actually a vegetable. The leaf stalks of the rhubarb plant are the edible part. Rhubarb tastes somewhat similar to celery and has a tart, sweet taste. Although most people "ugh" when they hear rhubarb, certain people (like myself) absolutely love it! I love making an infused liqueor with it

For tools, it’s pretty don't need too many things. I make this syrup in a mason jar with a lid and a good spatula to scrape down the sides.

Here's how to make rhubarb syrup at home in four steps:

Chop up the rhubarb into smallish pieces (about 1-inch long).

Combine the chopped rhubarb with sugar in a jar or bowl and seal tightly.

Leave it alone for a few days until the liquid is released from the rhubarb. Make sure to shake it once a day and use a spoon or spatula to mix it up.

This may take anywhere from 24 to 48 hours. It depends on how much sugar you use (the more sugar, the longer it will take).

Strain out solids with a fine-mesh strainer or cheesecloth. Set it over a bowl or jar until most of the liquid has drained away from the rhubarb; don’t discard it though! It’s a tasty snack on its own.

Store the rhubarb simple syrup in an airtight container (I like to use these mason jars).

Use within 3–6 months for the best flavor.

The secret sauce for this rhubarb syrup is leaving it alone until the liquid is fully released. It's easy to adjust the sweetness level depending on how much sugar you use (more sugar = less liquid).

In my experience, this takes anywhere from 24-48 hours depending on how much fruit was used and how juicy it was when you chopped it up. You'll know when it's ready because there will be about ½ a cup of liquid at the bottom of your container. You may n

The tart flavor of rhubarb makes it a great addition to any cocktail, as well as to other flavor combinations. Here are three quick simple drinks to make with this rhubarb syrup.

Combine 1 cup of chilled seltzer water with ¼ cup of Rhubarb Syrup (recipe below) in a tall glass filled with ice cubes. Top with a splash of club soda and garnish with an orange slice if desired.

Pour 2 ounces of gin into a shaker filled with ice cubes. Then, add ½ cup of Rhubarb Syrup. Next, shake vigorously until well-chilled. Strain into a tall glass filled up with ice cubes. Top with 3 oz of club soda or seltzer water. Garnish with an orange slice if desired.

Mix ¼ cup of Rhubarb Syrup with 8 ounces of sparkling water in a glass filled with ice cubes. Add 2-3 slices of cucumber for garnish if desired.

Rhubarb leaves are poisonous, so discard them before using the stalks. Also, you should never eat any part of the rhubarb plant raw, as it can cause nausea, vomiting, and diarrhea. This is true for both the leaves and the roots.

How do you cook rhubarb?

You can simmer rhubarb in water or add it to soups and stews. You can also bake it with cinnamon or brown sugar for dessert.

When is rhubarb in season?

Rhubarb is in season from spring through early summer — usually April through June. So if you're looking for fresh local produce at its peak flavor, this is when to look for rhubarb at your local grocery store or farmers' market!

Use fresh rhubarb: If you're lucky enough to have access to local rhubarb in season (April through June), then go for it! Otherwise, look for organic rhubarb from your farmer's market or grocery store.

Pick stems with bright green leaves and firm stalks that feel heavy for their size. Stems should be about 3 inches long or longer — any shorter than that, and they'll be too sour for this recipe.