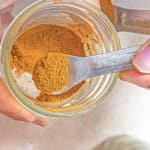 Pumpkin pie spice is easy to add a fall flavor to baked goods and desserts. But many people miss the fact that it’s a blend of five different spices, and then they wonder why their pies or cakes lack that certain something. So, I decided to create my homemade pumpkin pie spice blend.

And I have to tell you that it's even better than the store-bought version! If you don't have pumpkin pie spice available and want to substitute for individual spices, try making your own blend.

What is in Pumpkin Pie Spice?

Pumpkin pie spice is a blend of spices used in fall recipes. This blend contains cinnamon, ginger, nutmeg, mace, and cloves. All are intense flavors with different tastes. Allspice cannot recreate the same taste by substituting it in place of individual spices. You will want to keep some of the same flavors, but you will also want your new blend to have its unique taste.

Start with one tablespoon of cinnamon and one teaspoon of ginger. Add ½ teaspoon cloves, ½ teaspoon allspice, and ¼ teaspoon nutmeg. Give the mixture a thorough stir.

Why make a homemade spice mix?

Well, store-bought pumpkin pie spice has been sitting on shelves for a while and is just not as good as freshly made. However, some other spices are much better fresh than when they are old. Also, you can add some interesting flavors to spice mixes that you can’t get in commercial blends, such as lavender or rosemary.

Most people don't have any of these spices in their cupboards individually because they aren't used often enough. So instead, they buy pumpkin pie spice, which gives them a dozen spices for the price of one.

What are the differences between whole spices and ground spices?

Whole spices tend to give the best flavor, but they take a little more effort to grind and measure. If you're using pumpkin pie spice in something like a cake mix, which will be mixed with other ingredients anyway, whole spices might be too much.

Ground spices are easy to work with and often come in pre-measured containers, perfect for convenience foods.

If you cannot find whole spices, consider substituting them with ground versions of the same blend. But if you do have the time, pick up a Microplane or a spice grinder (aka a coffee maker *just* for spices!*) and get grinding!

The difference between Pumpkin Pie Spice and individual spices

The most significant difference between the pumpkin pie spice and the individual spices is the amount of cinnamon.

Pumpkin Pie Spice is a mix of cinnamon, nutmeg, ginger, and cloves, with variations depending on what else the recipe calls for. It is a quick way to flavor a pumpkin pie or other pumpkin dish without measuring out four individual spices.

Pumpkin pie spice is readily available at grocery stores and online. Although it is convenient, four basic spices are easy to substitute for this blend in recipes.

The individual spices can be used in equal amounts, but you will need more than the amount called for in the recipe, use just cinnamon because it is the dominant flavor in pumpkin pie spice.

Pumpkin pie spice works well in pumpkin pie, but it's also an excellent blend for other fall dishes like apple pie, apple crisp, and ice cream.

You can purchase them at the grocery store or a health food store. The cinnamon, ginger, and nutmeg are probably available at a general grocery store, but a specialty food store may have the cloves and allspice.

There is no exact measurement used to make pumpkin pie spice, so it is okay if you use more or less of an individual spice than is called for in a recipe.

If you like to experiment with different flavor profiles, substitute up to ¼ teaspoon each of nutmeg, mace, and cardamom for the cinnamon in the recipe if desired.

Use star anise, cardamom, or even black pepper

You can also create variations by using different proportions of each ingredient or adding a pinch of ground cloves or ginger to the mix.

Once everything is combined, use a funnel to pour it into whichever container you choose. I prefer glass ones to see what's inside without having to open them every time I need some for a recipe. Label it according to what season you made it.

How much pumpkin pie spice do I use instead of individual spices?

It takes about one teaspoon of pumpkin pie spice to replace the individual ingredients in one batch of pumpkin pie filling. That comes out to about ¼ teaspoon cinnamon, a pinch of nutmeg, and a dash each of ground ginger, ground cloves, and allspice.

What is the difference between pumpkin pie spice and apple pie spice?

No, they are not the same. Although both contain cinnamon and nutmeg, pumpkin pie spice has nutmeg, ginger, allspice, and cloves. Apple pie spice has cinnamon, nutmeg, and allspice.

Can you substitute ground cloves for pumpkin pie spice?

Yes, you can use pumpkin pie spice in place of cloves. However, if you're making a homemade version, add other spices to pump up the flavor. Cinnamon and nutmeg are two very common additions to pumpkin pie spice blends. Rosemary and allspice are also used in some recipes. You can experiment with your favorites to find the best way to make your blend.

How do I store this?

Store the spice blend in a jar or airtight container for up to 6 months.

How to make pumpkin pie spice?

Mix these thoroughly and use the mixture in place of pumpkin pie spice in any recipe that calls for it.

In a small mixing bowl, add measured ingredients, with a spoon or whisk mix and give the mixture a thorough stir.

Take care to make sure there are clumps or unincorporated ingredients.

Store in an airtight container with a lid. Use within 1 year for optimal freshness.