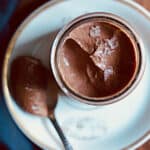 Homemade chocolate pudding is the perfect dessert for a dinner party. It's rich, creamy, and decadent—but most chocolate puddings are loaded with fat and sugar. This Mousse au Chocolat recipe uses dark chocolate, which is lower in fat but still satisfyingly creamy.

The secret ingredient is aquafaba, which binds the ingredients together without the need for cornstarch; it also makes the silky pudding smooth when whipped with a mixer (we think a hand whisk would work just as well).

Why this recipe works

The recipe works because it uses a combination of dark chocolate and aquafaba.

Aquafaba is the liquid from canned chickpeas that you usually drain off, but it can also be used as a vegan swap for eggs in recipes.

In addition, it creates a good texture for this pudding, which means you don't have to add cornstarch or other thickening ingredients like eggs would usually do in other chocolate pudding recipes.

Chocolate pudding is one of those things that's hard to make from scratch because it's so easy to just buy a box of instant chocolate pudding and be done with it. But if you've got the time, this recipe is worth trying.

First thing: get your aquafaba. The idea behind aquafaba is that when you open a can of chickpeas, all those leftover brine juices are vegan egg whites!

Also, note that this recipe uses coconut oil instead of butter or margarine—it really gives the pudding a richer flavor and makes it much easier to blend into a smooth consistency.

Finally, dark chocolate is important here because it has a higher cocoa content than milk chocolate. This means more antioxidants, which will help your body absorb all those delicious nutrients!

1. Combine the chocolate and oil in a bowl set over a pot of simmering water until completely melted and mixed. Once combined, remove from heat. As it cools slightly, it's time to prepare for step 2.

In a separate mixing bowl (preferably a stand mixer), whip together the aquafaba until light and fluffy.

Fold in the melted chocolate mixture into the whipped aquafaba mixture until thoroughly combined.

Pour into ramekins or small glasses and refrigerate for at least 4 hours (or overnight). Serve chilled with fresh berries if desired!

Pudding can be made up to 3 days ahead and refrigerated in an airtight container until ready to serve.

Storing this delicious dessert seems simple enough: just keep it in an airtight container in your fridge until ready to eat! Leftovers will keep well up until two weeks later—and there are bound to be leftovers unless everybody else at home shares your love for chocolate treats as much as I do!

This simple chocolate pudding recipe is the perfect dessert for any occasion. It's delicious, easy to make, and totally customizable! The best part? Chocolate lovers will be delighted with this creamy, melt-in-your-mouth chocolate pudding that goes well with just about anything—berries, nuts, or even graham crackers!